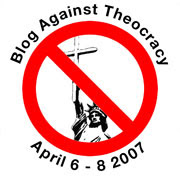 At first glance it might appear to be a solution, but like all things deemed "to good to be true" taxpayer funded school vouchers are a really bad idea. It's also one of the toughest discussions you might ever have, particularly if you are taking with a parent concerned about the kind of education their child is receiving. So let's examine the issue for a moment.

First, more than 90% of all children are educated in public schools. So doesn't it seem reasonable to think that if there is a problem with public education the solution might be to fix the problem, instead of simply offering a Bandaide solution, so that all students would benefit?
Rev. Barry Lynn, the executive director at Americans United for Separation of Church and State is fond of using this analogy. He says, in essence, 'think about your house for a moment, and how you would feel if it caught fire and burned to the ground because the local fire department didn't have enough fire trucks, and the fire fighters just couldn't get to your house in time to put out the fire. What would the solution to this problem be? To pass a voucher measure, that provided taxpayer funded vouchers so that everyone could go to the nearest Home Depot and purchase a fire extinguisher for their home? Or, would a better solution be to fix the problem that prevented the fire department from getting to your house in the first place?'
Do we really want to give a handful of students taxpayer funded school vouchers, in the hope that a few might get a better education? Or would a better solution be to finally get serious in the country about public education and put the necessary resources behind solving the problem. (And I'm NOT talking about Leave No Child Behind -- which has left a BUNCH of little behinds behind.)
By now you might be asking yourself, if this is a Blog Against Theocracy blogswarm, why is she talking about taxpayer funded school vouchers
Well, in case you weren't aware of it, more than 85% of all private schools are private religious schools -- which means your tax dollars could be going toward funding a religious belief that is counter to your own. (And I am including in that comment your 'belief' not to believe.)
Also, almost all the taxpayer funded school voucher programs in existence today were designed so that the only schools willing to participate are private religious schools. The religious schools will accept a voucher of anywhere from $2500 to $4000 as full tuition payment. The better private schools, that have waiting lists and cost $20,000 a year or more, won't.
So, most of the taxpayer funded school voucher dollars are going right into church coffers.
Let me add that I fully support a parents decision to choose to send their children to a private religious school. Many do so because they not only want their children to be educated in the basics -- reading, writing and arithmetic -- but they also want their children to receive religious instruction. In many private religious schools religion isn't taught as a separate class. The students don't learn religion in first period, and then switch to secular math, english and science classes for the rest of the day. Religion is woven into every class lesson. And again, for the parents who choose that for their children, that's great!
But what about the child that transfers from a public school deemed to be "failing", into a private religious school that is not in keeping with the faith tradition of his or her family? Should that child's math education include learning how to add by counting the number of animals that boarded Noah's Ark?
And there is a great deal of evidence that suggests that the education children are receiving in these schools isn't significantly better than the education they receive in public schools. Keep in mind that public schools MUST ACCEPT EVERY student. That means students with behaviour problems, students with special needs, students with modest test scores. And, public schools must meet certain standards.
Private schools can exclude disruptive students, they can decide not to accept children with special needs, and they can even require that students maintain a certain grade point to remain at the school. And, there are no education standards that must met. It's also good to keep in mind there are no significant differences in test scores of public and private school students. To find out more about this I would suggest you start with David Berliner's book The Manufactured Crisis (written with B. J. Biddle).
You might wonder why I care about this, since I don't have any children of my own. I care because I recognize the value to me, and to all of us, in having an educated people living in this country.
As a nation we've made a commitment that our children received an education. How do we expect to compete in a global community if they don't? I want every child to receive the best education possible, and I want them to learn a full spectrum of ideas -- not ideas tied to one specific religious ideology.
Americans United says it best:

Americans must be free to contribute only to the religious groups of their choosing. Voucher programs violate this principle by forcing all taxpayers to underwrite religious education. Often, religious schools promote sectarian dogma and take controversial stands on issues such as gay rights, the role of women in society and reproductive freedom. Taxpayers should not be required to subsidize the spread of religious/moral opinions they may strongly disagree with. All religious projects including schooling should be funded with voluntary contributions from church members.

Education and it's decline here in the US in the last 40 or so yrs, is most annoying. Worse than that really, but it's too early to be more descriptive.

What's a matter with these people?

Thanks for joining in!

I know what you mean. I could go on and on about public education. Like the way pubic school teachers are demonized, yet in every incident of school violence who placed their bodies between the students and the shooters? The TEACHERS!

Thanks for the comment on my site. I love the blogs that comment on issues (like yours) and know that mine is more a dump of my thoughts, sometimes considered and sometimes not. But this post of yours is fantastic. The writing's great, blah blah blah (you knew all that!). But the fact that I didn't once see you mention the idea that some bright spark (pun unintended) might say: "the problem with the burning down of houses should not be solved by issuing extinguisher vouchers or revamping the fire department -- it should be solved by opening the department to outside competition".

This red herring is raised often by voucher supporters -- the idea that all they're doing is making the public school compete with the private ones. On the one hand, this argument can be refuted on its own ground. On the other, you can choose to frame the issue as not having to do with the free market at all and say it's a matter of freedom from theocracy. After all, we would never dream of offering subsidies to people who didn't like the government's pest control, or trash collection, or police forces, and wanted to hire one with an overtly religious bent.

The issue is separation of church and state, and that constitutional and moral axiom trumps the economic theory that the market rules all.

Anyway, thanks for letting me rant on your blog. I suppose I could turn this into a post on my own if I wanted ;)

Thank you for your excellent comment. I often think when I hear people say that we need to get government out of education and let the private market dictate which schools succeed and which fail that something like 80% of ALL new business ventures fail. Do we want to set up a system that has the potential of an automatic 80% failure rate when we are talking about educating our children? I certainly hope not.