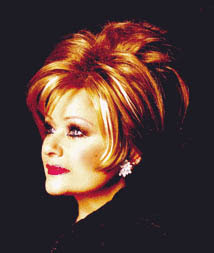 One of the last public statements Tammy Faye Messner made was: "Don't let fear rule your life. Live one day at a time, and never be afraid." On Friday, Tammy Faye, the former televangelist and Christian singer who battled inoperable cancer, died.

CNN's Larry King was asked by the family to make the delayed announcement on Saturday evening. "She died peacefully," King said.

Tammy Faye first rose to prominence as co-host, and wife, of TV televangelist Jim Bakker. Their PTL television ministry was the first and most successful of its kind. So successful that when Jim Bakker's empire began to crumble following allegations of an affair and mismanagement of funds the Rev. Jerry Falwell swooped in to take over the operation for his own gain.

In a documentary of her life, The Eyes of Tammy Faye, Tammy Faye talked about how the couple was tricked out of their ministry by rival televangelist Jerry Falwell.

Falwell, it is claimed, promised help and support, then denounced them, staged a coup, and needlessly forced their ministry into bankruptcy [...] their fall was as spectacular as their rise. It was the biggest scandal of its day, and one of the big crashes of the late 1980s. The Bakkers found themselves crucified in the court of public opinion for their greed and supposed corruption.

The film claims that the accusations that they embezzled money from their ministry were completely false, and that although they lived well, they lived no better than any other televangelists running multi-million dollar ministries.

The documentary presented Tammy Faye as an icon in the gay community. The Washington Post quotes Messner, who said:

"How sad that we as Christians, who are to be the salt of the earth, and we who are supposed to be able to love everyone, are afraid so badly of an AIDS patient that we will not go up and put our arm around them."

The tribute went on to say:

The film's directors, Fenton Bailey and Randy Barbato, spoke of her "over-the-top camp sense that we relate to." She appeared at gay pride festivals nationally and spoke warmly of the support she felt from homosexuals.

In 1996, she co-hosted another TV talk show entitled The Jim J. and Tammy Faye Show, with Jim J. Bullock, an HIV-positive and openly gay actor. The syndicated show ended when Tammy Faye chose to leave after being diagnosed with colon cancer.

Tammy Faye was criticized by evangelicals for co-hosting the program with a gay man. Her response to them was "God doesn't make any junk."

At a book signing for her recent best-seller, I Will Survive... And You Will Too, Tammy Faye made an impassioned plea for all people to grant themselves permission to cast off the things that are holding them back, to forgive themselves and others, to be happy with themselves whoever they are, to persevere in the face of opposition, and to show each other unconditional love.

Excellent advise from a good woman. Tammy Faye's positive attitude will be missed.

Email ThisBlogThis!Share to TwitterShare to FacebookShare to Pinterest
Labels: In Memoriam

Wow! I haven't stopped by you blog in a while. What a great post! I didn't know any of this stuff about Tammy Faye Baker. I found this post by you from Tengrain's link.

Thanks for stopping by! Come back again!