A Double Standard: "Iron My Shirts" No Big Deal 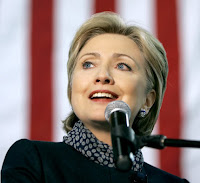 Anna Quindlen's article in the current Newsweek is a must read for the progressives among us who still 'just don't get it.' Hillary Clinton's presidential bid has brought to the surface a double standard that many of us know still exists -- but as Quindlen points out is "just more nuanced."

And anyone visiting any number of so-called progressive blogs who dares to post a comment in support of Sen. Clinton, soon finds themselves the target of some of the worst misogyny I've witnessed in a long time.

I once had a boss who would praise any woman he considered particularly promising by saying that someday she could be managing editor. He thought this was a big deal; at the time no woman had come close to a job that elevated. The only problem was that managing editor was the No. 2 job, and it was hard to believe that anyone would tell a guy that he was such a star that he might rocket to the second spot. One crazy day I said that. My boss looked at me as though I had lost my mind because I'd spoken it. Lack of gratitude, sense of entitlement—that's what he was thinking. [...]

[T]here has also been an inescapable undercurrent of bias. It's summed up in the word "calculating," which is often used to describe the senator in as witchy a way possible. There is no male politico equivalent for "calculating," except perhaps "business as usual."

Consider the guys who yelled "Iron my shirts!" at a Clinton event in New Hampshire. The point wasn't the yahoos with the Neanderthal mantra; it was that their jeers got little coverage. If someone at an Obama rally had called out a similar remark based on racial bigotry—"Shine my shoes," perhaps—not only would it have been a story, it would have run on page one. [...]

Even the prototypical new man, Senator Obama, had his moments, accusing Senator Clinton of attacking him "when she's feeling down," making opposition sound like shoe shopping. Imagine Obama using that turn of phrase against McCain. You just can't. [...]

Attacking this persistent pernicious nuance isn't victim politics of years past. It's important for the future. There aren't that many wonderful people running for elective office in America; if you need reminding, take a look at some members of the Senate. And if half the available candidates are held to some unexamined standard in which ambition is considered a pejorative and a loud voice a turnoff, that deficit will persist. Make no mistake about it: if we're going to continue to have elections that excite and engage, we need the women.

Exemplary husband, perfect kids, no negatives—I guess you could argue that the double standard guarantees that female candidates are stellar since they are required to be all things to all people. It was a woman politician, the mayor of Ottawa, who is responsible for one of the most notable quotes about this: "Whatever women do they must do twice as well as men to be thought half as good. Luckily this is not difficult." It may be an era of change, but Charlotte Whitton's 1963 comment still rings true. I've just always thought she was a little too sanguine about the math.

"Whatever women do they must do twice as well as men to be thought half as good.

And women politicians don't seem to have time to run around with prostitutes, either ....

I can't believe it, but I just saw a post that tied the Spitzer affair to a slam on Hillary. You see, they feel that Hillary should ask him to resign because she didn't ask Bill to resign when he had his affair. Then they said if she DID ask him to resign, she would be two-faced. I know that makes no sense, but to those idiots who are now calling themselves "progressives", any chance to slam Hillary instead of commenting on Spitzer's behavior is ok.

It's funny, because I made the same comment about Hillary being called to "Iron My Shir". I said if someone had yelled "shine my shoes" to Obama, we'd never hear the end of it.

any chance to slam Hillary instead of commenting on Spitzer's behavior is ok.

Mary Ellen, have you been reading Huffington Post again?

suej and bac- nah, I absolutely refuse to click onto Huff post. I've decided that it's against my religion...one of those "thou shalt not's" . It was on a smaller progressive blog.

I don't know about you, BAC, but I'm feeling as if I'm fighting a lost cause. Hillary blogs are outnumbered by Obamabot blogs by 10-1, at least. I can't watch any news, it's all Obama-all the time. I can't listen to Air America, it's all Obama-bash Hillary all the time. Most of the blogs, even the small ones, are anti Hillary/pro Obama. The hatred for Hillary is just palatable AND irrational! I thought it was bad when the right wingers were taking over, I could somehow say "It must suck to be a Republican". Now, my own party seems to have gone mad! I got so fed up with my blog today I came really close to hitting that "delete blog" button. I'm not sure how much more of this I can deal with.

I came really close to hitting that "delete blog" button.

Oh, no no no! Please don't do that! I just found your blog!

Seriously, as hard as it is, I think it's really, really important that we keep some rational, grown-up voices in this national conversation.

Some of these commenters (I'm thinking of one I read at your blog, Mary Ellen) remind me of the middle school boys I used to teach who just loved to yank my chain. They just live for the reaction to their comments. Don't engage those types. They're being childish and aren't worth your aggravation.

Mary Ellen said: "The hatred for Hillary is just palatable AND irrational! I thought it was bad when the right wingers were taking over, I could somehow say "It must suck to be a Republican". Now, my own party seems to have gone mad!"

Bingo! I've been thinking that for a while. And have even said the same thing elsewhere. This must be what it felt like for the more traditional Republicans when their party was taken over by folks who attacked dissenters and who used irrational hateful memes repeated instead of actual factual discussions.

Why should anyone be treated as a pariah for supporting either Hillary Clinton or Barack Obama? They are both good candidates. I personally had more issues with Obama and voted for Hillary in my primary (my state went strongly for Hillary - so I guess Massachusetts is going to be kicked out of the Obama Party.)

Mary Ellen ... you simply can't delete your blog. If you do, the terrorists win!!

I absolutely understand how frustrating it can be, but it's all the more reason why we must continue to blog.

So take a deep breath ... look at all the comments on your blog ... find the one that makes you the most crazy, and then ... DELETE IT! ha

Hey, there is no free speech zone on my blog, baby. You say something that really pisses me off and you're outta here! May not be democratic ... but it's my blog. (trust me, you will feel better if you do this simple exercise)

SueJ is right. They just want the attention. The most irritating thing you can do to a really negative commenter is ignore them.

And mwb, I absolutely agree. And if you are in Boston, check out the simulcast event produced by First Freedom First. It’s going to be great! There is link in my side bar, and in a post near the top.