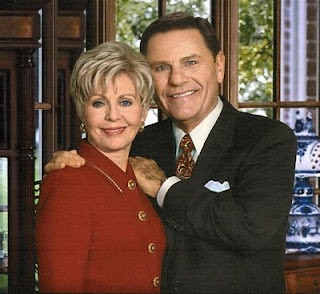 When I read this the first thing that popped into my mind was: "This sounds like Amway!" And while the government has yet to prove Amway is a pyramid scheme, anyone who has ever been involved with it sure sees all the signs. One person brings in another, and the only ones getting rich are the people at the top!

Kenneth Copland Ministries seems to have that same undercurrent -- only the only people who ever get to be on top are "family."

Here in the gentle hills of north Texas, televangelist Kenneth Copeland has built a religious empire teaching that God wants his followers to prosper.

Over the years, a circle of Copeland's relatives and friends have done just that, The Associated Press has found. They include the brother-in-law with a lucrative deal to broker Copeland's television time, the son who acquired church-owned land for his ranching business and saw it more than quadruple in value, and board members who together have been paid hundreds of thousands of dollars for speaking at church events.

Church officials say no one improperly benefits through ties to Copeland's vast evangelical ministry, which claims more than 600,000 subscribers in 134 countries to its flagship "Believer's Voice of Victory" magazine. The board of directors signs off on important matters, they say. Yet church bylaws give Copeland veto power over board decisions.

While Copeland insists that his ministry complies with the law, independent tax experts who reviewed information obtained by the AP through interviews, church documents and public records have their doubts. The web of companies and non-profits tied to the televangelist calls the ministry's integrity into question, they say.

You really need to read the entire article to get the full impact.

There are some who think religious organizations are getting too many tax breaks in the country. I think it fair that their house of worship, and any services directed toward helping those in need are fair exemptions -- like any other 501(c)(3) organization would receive. But it appears that everything Copeland's group is involved in has been placed under the umbrella of the church -- including things like the ministry's $17.5 million jet (and other aircraft), a private airstrip, and a $6 million church-owned lakefront mansion. And did I mention oil?

No company officials — including John Copeland, its president — has received compensation or profits from the company, and all revenue goes to the church for general operations, [spokesperson Lawrence] Swicegood said. Reserves from gas wells in the church's name were valued at $23 million last year, county records show.

Nice work, if you can get it!

Kenneth Copeland Ministries is a 500-employee operation, with a budget estimated in the tens of millions of dollars.

Kenneth Copeland Ministries is organized under the tax code as a church, so it gets a layer of privacy not afforded large secular and religious nonprofit groups that must disclose budgets and salaries. Pastors' pay must be "reasonable" under the federal tax code, a term that gives churches wide latitude.

Copeland's current salary is not made public by his ministry. However, the church disclosed in a property-tax exemption application that his wages were $364,577 in 1995; Copeland's wife, Gloria, earned $292,593. It's not clear whether those figures include other earnings, such as special offerings for guest preaching or book royalties. Another 13 Copeland relatives were on the church's payroll that year.

Some might argue that Copeland is protected through 'truth in advertising' ... after all, he bills his ministry as one that believes God wants his followers to prosper. From all appearances some are "prospering" a little bit more than others!

Corrupt, evil, underhanded? All of the above. But Copeland seems to have set himself up quite a tough nut to crack on getting charged with something illegal.

I completely agree with you on the if it isn't the church sanctuary/place of worship that property should not be tax free. But that oil company is a perfect set up. As long as it is a privately held company, it can do whatever it wants with the profits. If it decides to donate 100% of the proceeds to a tax deductible charity, I (not a tax lawyer by any stretch of the imagination) can't see anything illegal. It would be like telling someone they donated to much to the IRC or Amnesty International and they should be fined/taxed...

Can't call this jacka$$ stupid, thats for sure... Here I was thinking it was just a joke to start my own religion for the tax benefits.

I think there is a special circle of Hell for people like the Copelands.

Sigh. And the sheep still follow, checkbooks in hand.

I wish I could believe in a god who wants me to be rich.

I wish I could believe in a god who wants me to be rich.

DCup, be like these folks, just believe whatever you want! Greed? Deadly sins? What?

But those gays -- now that's an abomination!

Copeland does have a valid argument, whether you support his teachings or not. Grassley should have started this whole extravaganza using the IRS, and he would have saved himself alot of trouble. The decision made in this case will end up affecting all of us in the end.

Sadly, all too common.

There's a big megachurch around here that was set up by the minister purely as a sure fire way to have a means to employ his wayward children. Nepotism overload.

It is ironic that republican type churches get away with all kinds of depravity yet liberal churches get audited by the IRS and FOX crazy viewers decide a church is too liberal and decides to kill their followers.

Justin Peters speaks extensively on the Copelands in his seminar, "A Call for Discernment." To view an overview see: http://www.justinpeters.org and watch "demo."

Caron - thanks for the info and welcome!