New LGBT Caucus in US Congress 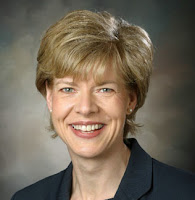 One of my favorite members of Congress -- Rep. Tammy Baldwin -- is co-chair of a new lesbian, gay, bisexual and transgender Congressional caucus. Pink News reports:

A cross-party group of US Congressmen and women have formed a new campaign to push for greater rights for lesbian, gay, bisexual and trans Americans.

The LGBT Equality Caucus wants the extension of equal rights, the repeal of discriminatory laws, the elimination of hate-motivated violence, and improved health and well being for all, regardless of sexual orientation or gender identity or expression.

It will also tackle US foreign policy with regard to the human rights of LGBT people across the world.

The only two openly gay members of Congress, Democrats Barney Frank and Tammy Baldwin, announced the formation of the caucus at a Capitol Hill press conference yesterday. [...]

In November the Employment Non-Discrimination Act was passed by the House by 235 to 184.

ENDA was originally designed to make it illegal to fire, refuse to hire or promote a person based on sexual orientation or gender identity.

The decision to remove trans people from the scope of the legislation caused anger among the LGBT community in the US, with many demanding an "all or nothing" stance.

Many of the House Democrats serving their first term did not want ENDA to include protections for trans people, fearful of a backlash from conservatives.

ENDA would need Senate approval before it could become law, but President Bush has already indicated he would veto it.

In May the US House of Representatives passed the Local Law Enforcement Hate Crimes Prevention Act with a strong bipartisan vote of 237-180.

The Senate approved the nearly-identical Matthew Shepard Act as an amendment to the Department of Defence Authorisation bill on a voice vote.

President Bush had indicated he would use his veto to block any attempt to extend federal hate crimes laws to LGBT people. [...]

Ms Baldwin described the purpose of the new LGBT caucus as both symbolic and substantive:

"Symbolic because, historically, of all the member caucuses organised in the Congress over the years, none has ever been dedicated to equality for LGBT Americans.

"The very existence of an LGBT Equality Caucus in Congress makes a strong statement about the values this Congress and this nation hold dear."

At its founding yesterday, the Equality Caucus is comprised of the following members, with more expected to join in the coming months:

Email ThisBlogThis!Share to TwitterShare to FacebookShare to Pinterest
Labels: LGBT

We got a letter from Tammy today, even though we live in TN and not her state. It must be due to the fact that we support LGBT issues and have signed many a petition advocating equal rights of LGBT folks.

Great! She is one of the few members of Congress I actually know. I first met her back in 1993, and thought she was terrific. And even though I don't live in her district, I've supported her campaigns every election season since.

Glad to see my main man, Dennis Kucinich, on the members list!

It's about time. Great news.

what assholes -- all of them (the GOP that is)