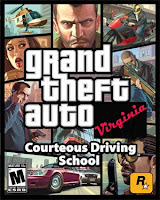 For some children getting a good eduation means everything, and for some it could also mean getting breakfast. That just might be the case in an incident today involving a young boy in Virginia.

A 6-year-old Virginia boy who missed his bus tried to drive to school in his family's sedan -- and crashed. His parents were charged with child endangerment. State police said the boy suffered only minor injuries and authorities drove him to school after he was evaluated at a local hospital for a bump on his head. He arrived shortly after lunch, Sgt. Tom Cunningham said. [...]

The boy, whose name wasn't released, missed the bus, took the keys to his family's 2005 Ford Taurus and drove nearly six miles toward school while his mother was asleep, police said.

He made at least two 90-degree turns, passed several cars and ran off the rural two-lane road several times before hitting an embankment and utility pole about a mile and a half from school.

"He was very intent on getting to school," said Northumberland County Sheriff Chuck Wilkins. "When he got out of the car, he started walking to school. He did not want to miss breakfast and PE."

His parents have both been charged with child endangerment, but notice the subtle sexism in this story.

The AP reports that his mother was asleep while all this was taking place, but they neglect to tell us the whereabouts of his father. The report also says the child's 40-year-old father was released on a $5,000 bond, but his 26-year-old mother is being held without bond.

County Sheriff Chuck Wilkins had an interesting response as well: "This really is a story of miracles," Wilkins said. "The Lord was with him, along with everybody else on the highway."

Why do I get the nagging feeling that the overtly religious message from the Sheriff is connected to the harsher treatment received by the child's mother?

I'm certainly glad the child was not hurt, or others on the road this morning. I would, however, like to hear more about this story.

Email ThisBlogThis!Share to TwitterShare to FacebookShare to Pinterest
Labels: things that make me crazy

I fault both the parents equally---some people have absolutely no business having kids. This would have never happened to me or my sisters when we were growing up.

This is kind of the other side of the coin to how the media treated the death of John Travolta and Kelly Preston's son. Only Travolta is mentioned as the parent in most media stories.

Lisa - you make a good point, which is that both stories smack of religious discrimination. Religion is sometimes used in an attempt to put people in their place.

Mothers need to be attentive to their children at all times, or they are betraying the role given to them by God. A father must make the right decision about what religious tradition the family will follow, or he is betraying the 'real' God.

Here is a caveat that makes me really curious about what has not been said about Dad & Mom's situation. Washington Post reports that "Wilkins said the father, David E. Dodson, 40, was under court order not to leave the 6-year-old and his 4-year-old sibling alone with their mother, Jacqulyn D. Waltman, 26, at their home in the town of Wicomico Church..."