A President Forgotten but Not Gone 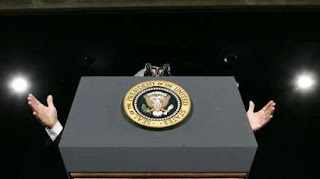 Frank Rich has really nailed it, regarding George W. Bush, in his op-ed "A President Forgotten but Not Gone."

We like our failed presidents to be Shakespearean, or at least large enough to inspire Oscar-worthy performances from magnificent tragedians like Frank Langella. So here, too, George W. Bush has let us down. Even the banality of evil is too grandiose a concept for 43. He is not a memorable villain so much as a sometimes affable second banana whom Josh Brolin and Will Ferrell can nail without breaking a sweat. He’s the reckless Yalie Tom Buchanan, not Gatsby. He is smaller than life.

The last NBC News/Wall Street Journal poll on Bush’s presidency found that 79 percent of Americans will not miss him after he leaves the White House. He is being forgotten already, even if he’s not yet gone. You start to pity him until you remember how vast the wreckage is. It stretches from the Middle East to Wall Street to Main Street and even into the heavens, which have been a safe haven for toxins under his passive stewardship. The discrepancy between the grandeur of the failure and the stature of the man is a puzzlement. We are still trying to compute it.

The one indisputable talent of his White House was its ability to create and sell propaganda both to the public and the press. Now that bag of tricks is empty as well. Bush’s first and last photo-ops in Iraq could serve as bookends to his entire tenure. On Thanksgiving weekend 2003, even as the Iraqi insurgency was spiraling, his secret trip to the war zone was a P.R. slam-dunk. The photo of the beaming commander in chief bearing a supersized decorative turkey for the troops was designed to make every front page and newscast in the country, and it did. Five years later, in what was intended as a farewell victory lap to show off Iraq’s improved post-surge security, Bush was reduced to ducking shoes.

Some of my favorite lines include the title "forgotten by not gone" and others, like: 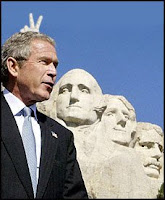 Rich truly outlines all that is wrong with George W. Bush -- as if we didn't already know! And the way he wraps up the piece is perfect. Rich recounts an exchange between Bush and a reporter, who asked what he had learned during his time as president. Bush's response:

“I’ve learned that God is good. All the time.”

Once again he is shifting the blame. This presidency was not about Him. Bush failed because in the end it was all about him.

Email ThisBlogThis!Share to TwitterShare to FacebookShare to Pinterest
Labels: bush

Wait a second! That shoe-dodging bit was the ONLY time I've been proud of this f*cktard President. He might still not actually know that his Iraq where they greeted us as liberators and where the costs would pay themselves and there would be unicorns writing epic poetry about His Chimpyness doesn't actually exist, but hey!, that man has got some gooooood reflexes.

That's a guy who played a lot of dodgeball as a kid, and had people wanting to knock the snot out of him even then.